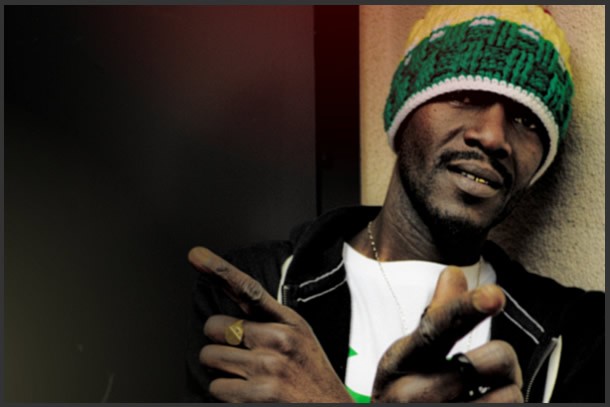 Jungle P is West Africa’s most authentic Ragamuffin/SingJay international act. In parallel with the most recent trend of reggae’s hottest offspring, ragga/bashment, Jungle P has often been mistaken for a rooted Jamaican. His conscious lyrical strength is unshakable, his patois is the proper dose achieved in Kingston, Montego Bay, Mandeville, up and down town Jamaica.

Born Baboucarr Sallah on the 21st of July 1973, in The Gambia (West Africa’s most peaceful tourist nation), Jungle P began toasting and deejaying at the age of 15. Alongside the likes of DeeJay John Jakali and Daddy Lion of GRMP, Banjul’s biggest sounds system, Jungle was the singing attraction as he would often perform his brilliant songs on stage. He came on with a distinctive reggae style that had this inviting flavour. With other crafts such as drawing and painting, which stood him out at school, Jungle P became unimaginably broad in his own creative sphere. His musical talent enlarged through the time and when he met producer/promoter Focks in 1990 a strong meaning to the flair evolved.
With Focks as his first ever producer, Jungle P recorded a debut project in 1991. The album was titled ‘Gambian Girls’. The album featured songs such as ‘No Place Like Home’, L.O.V.E, ‘Gambian Girls’ and more. The debut enjoyed excellent airplay. Jungle was often on the top of the list of performers in big concerts in Gambia. He brought another phase into Gambia’s love for reggae music.

Jungle flew to the United Kingdom in the mid ‘90s for further studies. Jungle would attract the attention of reggae/ragga producers in a jiffy. Just about one year in the United Kingdom, Jungle P worked with producer Joe Grine in London to release a sophomore effort. The album entitled ‘Gun-Talks/Slackness’ featured Swiss rapper SPK and Jamaican dancehall singer, Gospel Fish. That album glued Jungle firmly in the raga/SingJay Europe scene. From 1996 to 1997 Jungle toured different countries in Europe successively. In 1998 Jungle-P featured UK singer Jimi Thunder on a single he captioned ‘Jah Jah Love’.

Jungle-P moved to Geneva , Switzerland , in 2000. There he opened a dancehall nightclub (Oxygen Nightclub). Under his Reggae Rep Production, Jungle then ventured into organising concerts and talent hunt shows, whilst still consistent in the ragamuffin game. In 2002 he collaborated with SPK and Echo to form a record label in Geneva . They called it ‘Expansive Records’. The label produced a couple of upcoming reggae, ragga, hiphop and R&B artists. Towards the end of 2002, under Expansive Records, the full-length third album titled ‘Jah Jah Love’ was released. Swiss leading producer Naiche of California studio produced Jungle’s 2003 single ‘Things & Time’. “Soon as I finished this single I lost my mum. I went home and it was my most emotional period in life. ‘Things and Time’ was more like saying how things happen at their own chosen time. That song turned around to be a straight dedication to my mum,” Jungle explained. “I hold the single so strong in my heart.”

Other singles released in the same year included ‘Boom Weed’ and ‘Expansive Click’. Through 2004 and 2005 Jungle-P was collaborating with various artists on several singles. Further nicknamed ‘THE GAMBIAN’, Jungle–P is working restlessly on a new album, which will be coming with the self-title ‘The Gambian ’. “I chose this new name to trace my roots; my background,” he said. “I want the entire global music followers to know that am a Gambian; born and nurtured in that land.”

Jungle’s savvy in the music biz is expanded in the forthcoming album. The versatile singer whose acrobatic voicing attitude has earned him the credit of varying voice sections is investing his skills to the max in the new project. Jungle does most of the backup voices in his songs. His lyrical subjects are in the most intelligent balance. He picks on any subject that’s on the frontline and treats it with no bias sentiment. Jungle’s got this hardcore and cultured style but his sentimental lines crack spines. ‘The Gambian’ is anticipated for release in the first quarter of 2007…